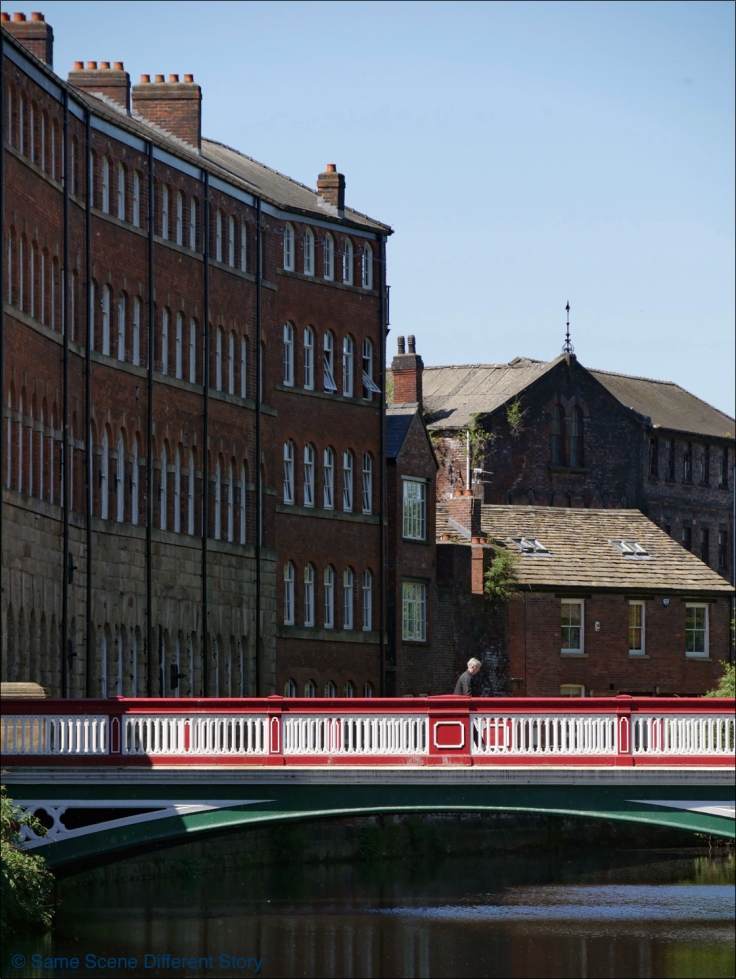 Cross That Bridge When You Get To It

The long summer of ’76 was the year Ted and his friends spent the school holidays playing in the local fields. He was 11 years old and he and his pals made their own fun. One of their favourite games was damming the local stream to make small ponds. Some days they fooled around and got soaking wet. They were full of joy and carefree and the cold water was like a gift helping to keep them cool. Other days they would use the newly formed ponds to race their small home made sail boats.

Having watched Bridge Over The River Kwai the day before, the next morning Ted pitched to his friends that instead of a dam they should build a bridge. To rally their support he explained they could build a bridge across the stream at a point which would give them easy access to the woods with no more feet wet. Some of the others had also seen the same film and shared Teds enthusiasm.

As they all chipped in with their ideas about how to build the bridge it soon became clear that they would first need to become outlaws. This was largely due to the fact that the nearby building site, where a new estate was being built, would be their unofficial sponsor. It added a whole new level of excitement and danger to the project. They hatched a plan to liberate the materials they needed. Obviously it didn’t occur to them to simply ask the site manager. Why would it? This new level of rule breaking and mischief meant they needed a suitable name for their gang. Unanimously it was decided they would call themselves The Ant Hill Mob, after the television cartoon gangsters.

Their unofficial sponsor unwittingly obliged in suppling nearly all they needed to build the bridge. For the rest they improvised using stones from the stream or things dumped on local wasteland. Ted had spent a few years mastering his Meccano and Lego sets and the rest of the Ant Hill Mob knew he was the clever one. They respected his leadership on construction of the bridge. After the fruitful raid of the building site and two days of hard work, the bridge was completed and looked better than any of them had imagined. It was strong enough to support all of them standing on it at once and the woods was now theirs for the taking…

Presently in his fifties, it is this story which Ted attributes his passion for bridges of all types. Since 1976 his fascination with bridges has developed into a lifelong hobby. Collecting bridges is his unique pass time, a passion and a lifelong quest.

A bridge can only be collected by crossing it in both directions and then photographing it. Ted’s collection is mostly made up of bridges from the United Kingdom and Europe but extends to Australia, United States and even China. With a collection of over four thousand bridges they are all numbered chronologically. The Ant Hill Mob bridge is number one. The collection is meticulously indexed, categorised, cross referenced, coded and documented. Each with historical and interesting facts dating from construction to present use.

There are two questions Ted regularly gets asked; Why do you collect bridges? And what do you intend to do with the collection? Polite but economical with words his response to the first is usually “I like bridges.” and to the second “Keep it safe.”

And The River Flows

I had to cross the bridge to reach the riverside café where I had arranged to meet Annie. Annie Agony was her nickname amongst our circle of friends because she refused to talk about everyday matters such as the weather, politics or relationships. Instead she would launch full-beam into any topic that fascinated her that day. Which was the reason I had accepted her invitation; its not everyday you had the chance to expand your mind!

“Annie!!”. “Rob! You made it. I’ve got you an elderflower juice”. “Thanks Annie, I’m impressed you remembered”. “Well, you know me, Rob, my memory is as large as the moon; I can remember everything that has ever happened to everyone that has ever lived, and everything that didn’t happen as well!”.

A moment of reflection and a sip of ice cold sparkling elderflower juice. Mmm… lovely…

“I’ve been sitting here by this river watching it flow past at this pace and wondering how many years, how many epochs, has this river been flowing? Eternal perpetual motion. A miracle of water starting underground; to emerge as a tiny crystal-clear spring and then meander and grow into this mighty river that flows and flows all the way to the sea where it merges with the great oceans. Shouldn’t our home have been called ‘Water’ as there is a lot more of it than land!? And our bodies are mainly made of water too; we would be lost without it, shrivelled and dehydrated in a dusty desert! So this river flowed here and the people came to live by her side to drink, wash and cook day after day after day”.

The sun shone on the breeze-kissed ripples on the river and sparkled on the ice-cubes in the glasses as another moment of reflection passed.

“Do you know the name of the river and who those early people might have been, Annie?”. “Well, yes Rob, this is the river Don flowing through the heart of Sheffield, marking the southern-most end of the tribal lands of Brigantia. They were a celtic tribe called the Brigantes who worshipped the goddess Brigid. This was before the romans invaded us, of course, and destroyed our tribal way of life, including our reverence for the Goddess, and inflicting two thousand years of patriarchal rule on us; through their unholy trinity of church, time and straight roads. We still suffer under their tyrannical mindset; our sacred springs capped beneath the churches, our lives regimented in shackles to time and our freedom constrained to driving somewhere on the roads……”

Our drinks finished, clouds moved in from the north bringing a threat of rain. We hugged and said “see you later”.

This is a work of fiction and any resemblance to a living person is purely coincidental and unintended.

The views here expressed are solely the author’s and are not necessarily endorsed by SSDS.